Can you recover from schizophrenia?

Is schizophrenia a life sentence or was Krapelin wrong?

When Emil Krapelin first described schizophrenia in 1898 he called it dementia praecox or premature dementia because he thought that it involved a progressive deterioration of the patient’s functioning over time. This view persisted for many years into the 20th century. 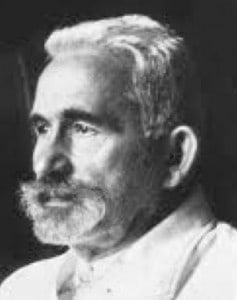 We now know that this is not the case and that the receipt of a diagnosis of schizophrenia is not a life sentence to an existence of low achievement. 1 Many people who have suffered an episode of schizophrenia or even multiple episodes go on to recover a very high level of functioning and often to be able to re-join mainstream society.2

Rule of thirds and rule of quarters

For much of the 20th century psychiatrists thought of recovery rates from schizophrenia in terms of what was known as the “rule of thirds”. According to this rule of thumb about one third of those diagnosed with schizophrenia would recovery completely, a further third would be improved over time, leaving the remaining third who would not show any improvement.

With improvements in treatment methods and newer medications, this model was seen to be unrepresentative and doctors now tend to use another rule of thumb which they call the “rule of quarters” and which suggests the outcomes after 10 years from diagnosis.

This rule suggests that about 25% of people with schizophrenia will recover completely from the first episode and go on to have no further problems in their life. A further 25% will be substantially improved with treatment and will go on to recover almost all of their former level of functioning with very few relapse events.

Another 25% of people will improve somewhat but will still need considerable levels of support to function normally and to get them through relapse events which will occur at several intervals in their life. This leaves the final 25% for whom the outlook is not so good. Of these, 15% will lead a chronic course with little or no improvement and involving repeated hospital stays over a prolonged part of their adult life, whilst the final 10% will die usually by their own hand.3

Disparity between clinical and social outcomes in schizophrenia 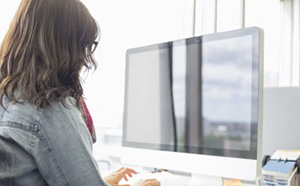 Even though most people with schizophrenia will recover to some extent, in the UK today very few people with a diagnosis are in any kind of work. (Image: bikeriderlondon on Shutterstock)

Why is this so? Well some would blame the stigma that people with schizophrenia face from employers when looking for work. But perhaps that stigma has other dimensions: perhaps there is also the stigma shown by those in the caring professions who see permanent unemployment as being the natural state for people with schizophrenia and have little ambition for the people in their care.

Perhaps there is also a type of stigma in the people living with schizophrenia themselves who, having had their self esteem destroyed by their illness, have little faith in their own capabilities and who see work as being permanently beyond their grasp. And maybe we could also ask whether our benefits system in the UK provides sufficient incentives and support to those recovering from schizophrenia to enter the difficult process of searching for a job.

Experience in other countries has shown that it is possible for many more people with schizophrenia to recover to a high level of social functioning.

Is there any way of predicting outcomes in schizophrenia?

A large number of studies have been carried out over the years to try to find ways of predicting which types of patients with schizophrenia will do well and which will not. Some of the evidence has been conflicting, however a consensus now seems to have emerged which shows that there are a number of factors that will affect the outcome in a person’s journey through this complex illness.4 Psychiatrists call the prospects for recovery, the prognosis and these factors, prognostic factors.

Factors affecting the outcome in schizophrenia

1. Rapid onset: if the illness has a rapid onset over a short period of time rather than a slow, insidious onset over many months, the prospects for recovery are better.

2. Age at onset: if the illness strikes at a younger age it will usually have a more serious course.

3. Sex: schizophrenia tends to be more serious in men than in women.

4. Florid symptoms; if the illness involves predominantly positive symptoms such as hallucinations and delusions the prospects for recovery are better than if negative symptoms are more dominant.

5. History of alcohol or street drug use: this will produce a very much worse outcome than if the person largely abstains from these.

6. Family history of schizophrenia: if the person has any relations who have suffered with schizophrenia a worse course is likely and the closer the relative the worse the outcome will be, however if there is a family history of depression then the prognosis is better.

7. Social support: a good social support network both before and during the illness will improve chances of recovery and being married or in a long term relationship also improves the outcome.

However, it must be remembered that these factors are only statistical indicators. Individual patients will, in practice, have a mixture of beneficial and adverse factors and that each factor will affect each patient in a different way. Some patients with good predictors may do badly whereas others with adverse predictors may do very well.5

What is the long term outlook for people with schizophrenia?

We now know that Krapelin was wrong: that most people with schizophrenia will improve over time and that if they pursue a recovery based approach to their life, with good adherence to medication and a healthy lifestyle, they will live long and happy lives. However we also know that people living with schizophrenia have a shorter life expectancy by about 8 to 10 years than average.6 Why is this so?

Well there are a variety of reasons. One reason is that people with schizophrenia have more accidents than other people. Even though they are less likely to drive they are involved in more traffic accidents. This may be simply because under the influence of positive symptoms like hallucinations and delusions they are less likely to take basic care in their everyday life. Some people with schizophrenia have reported how they would walk out in front of traffic without looking because they thought they were being protected by angels and were invulnerable2. 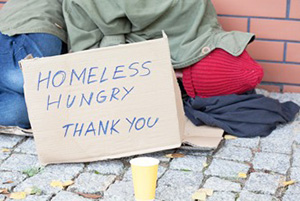 Sadly many people with schizophrenia in the UK still end up living on the streets or in prison. (Image: Photographee.eu on Shutterstock)

There is also evidence that people with schizophrenia are less likely to seek help with physical conditions such as cancer early on and that when they do present with physical conditions they may not receive appropriate help as quickly as those who do not have mental illness. There is also of course the problem that significant numbers of people with schizophrenia are homeless and consequently living in risky and unhealthy conditions7. 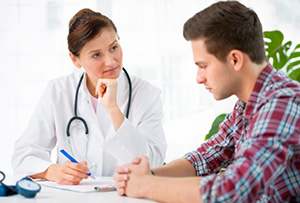 People with schizophrenia tend to suffer more form physical conditions such as cancer partly because they are often reluctant to approach their doctor. (Image: Alexander Raths on Shutterstock)

It should be emphasised that the chances of recovery are very much improved if a recovery strategy aimed at managing symptoms, improving quality of life, reducing stress and self monitoring to identify early signs of relapse is adopted. See our information sheet on recovery strategies for more on this.

Whilst any recovery process can be seen as a continuous movement along a path from severe disability to wellness there are a number of markers which help to signpost progress along the route.

1. Accepting your schizophrenia. You will not be able to recover from your schizophrenia until you have accepted that you have got a problem and that that problem is a mental illness. A diagnosis enables you to attach a label to your problems, to be able to explain all of your bizarre and distressing experiences and provides a starting point for your recovery.

2. Managing your symptoms. In this complex illness rehabilitation can only really begin when treatment with appropriate drugs and talking therapies has achieved a reasonable level of functioning and residual symptoms have been reduced to the point that they no longer interfere with every day life.

3. Recovery of basic social skills. An episode of schizophrenia often involves the loss of basic skills involved in running your life such as personal hygiene and grooming, budgeting and time management. Recovering these basic skills is both an indicator of your wellness and a toolkit to help make further progress.

4. Occupation. Occupation is an essential part of your recovery at every stage but later in the recovery process will come a time when you will want to occupy your time with more than simply household chores or light entertainment and at this point the prospect of study, volunteering or part-time work will be a real option.

In coping with schizophrenia some people advocate taking one day at a time. Whilst this may be useful when you are in crisis, a successful recovery involves identifying goals and working towards them. By identifying simple goals such as those listed above and using proven strategies for achieving them, a higher quality of life can be attained.2