The first generation of antipsychotics known as typical are very beneficial for the positive symptoms of schizophrenia but have no effect on negative symptoms.

Over the years a number of possibilities for treating negative symptoms have been practiced or proposed although it has to be said that each has had varying degrees of success in practice.

Use of Antipsychotic Medication

Sometimes what is perceived by carers and doctors to be a negative symptom such as social withdrawal may actually be due to positive symptoms. For instance if a person living with schizophrenia believes that they are being spied on and persecuted by MI5 then they may become reluctant to leave the house. This withdrawal could be interpreted by the doctors as negative symptoms but is in fact due to positive ones and in this case the correct choice of antipsychotic medication may well alleviate the withdrawal by reducing the delusions.

In other cases the reverse effect may be an issue. For instance if the antipsychotic chosen to treat positive symptoms causes side effects such as sedation then these problems may be misinterpreted as negative symptoms. In this case a change to a different antipsychotic or a reduction in the dose may be the way forward.

It is clear then that the correct choice of antipsychotic for the treatment of positive symptoms will have significant implications for the negative symptoms as well.

Effects of the Atypical Antipsychotics

In the 1980s the second generation of antipsychotics called atypicals such as olanzapine, risperidone and amisulpride were introduced and are now the drugs of first choice for doctors in the UK treating psychosis. At first it did seem that these new drugs were not only just as effective at treating the positive symptoms as the first generation but were also effective against negative symptoms as well. However it has to be said that, in the light of the evidence that has accumulated over the time these drugs have been in use, the jury is still out on this. There was some early hope that the second generation of atypical antipsychotics would also have an effect on negative symptoms but the evidence is not conclusive now.

The so-called third generation of antipsychotics such as aripiprazole are also said to have an effect on negative symptoms7 but it is rather too early to draw any firm conclusions. 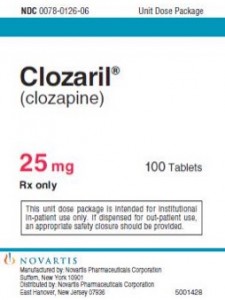 Clozapine will be tried by doctors when other antipsychotics haven’t worked.

Clozapine is an antipsychotic for which there have been many claims of a pronounced effect on entrenched negative symptoms. Clozapine was introduced in the 1970’s and is in a class of its own in many ways. It should be used when at least two other antipsychotics have been tried without success and has been found by many doctors to be effective against both positive and negative symptoms. Unfortunately the side effects are even more problematic with this drug as it has an adverse effect on the white blood cell count called neutropenia and its use involves regular blood testing3,

In the UK guidelines for treatment of medical conditions, both mental and physical, are laid down by a body called the National Institute for Health and Care Excellence, colloquially known as NICE. Although the NICE guidelines for prescribing Clozapine are quite clear, some believe that doctors are in fact hesitant to use it and will try every other treatment option before resorting to Clozapine15. In addition not all experts agree on its efficacy and Torrey in particular finds the evidence of an effect on negative symptoms less than convincing4.

Some practitioners have used antidepressants in the treatment of negative symptoms and have claimed some success when used in conjunction with antipsychotics6. The antidepressants used are of the selective serotonin reuptake inhibitor (SSRI) type such as mirtazipine, fluvoxamine, citalopram and fluoxetine. In addition to their effectiveness in combating the depression they may also act to increase the blood levels of the antipsychotic thus increasing their effectiveness11 and some believe that antidepressants not only help with the depressive symptoms but also with the negative symptoms as well13.

However one problem here is that it is often difficult for the doctor to distinguish between the negative symptoms of schizophrenia and the symptoms of post-psychotic depression and it may be that in these studies some of the participants were in fact suffering from the latter rather than from true negative symptoms.

Some trials, particularly in the US, have been carried out with other types of medication including some treatments for Alzheimers and amphetamines but without any notable success.

Psychosocial treatments are available in some areas. Supportive psychosocial therapy can help people with negative symptoms re-learn social skills by learning new thinking processes. This in turn can have a beneficial effect on self esteem and motivation and lead to better personal relationships with family and close friends.

Some types of talking therapies particularly a form called cognitive remediation therapy have been found to have a useful effect on negative symptoms. This therapy, which was designed specifically for people with schizophrenia, is intended to improve thinking skills and can be done on a computer8.

· enabling people with psychosis or schizophrenia to experience themselves differently and to develop new ways of relating to others
· helping people to express themselves and to organise their experience into a satisfying aesthetic form
· helping people to accept and understand feelings that may have emerged during the creative process (including, in some cases, how they came to have these feelings) at a pace suited to the person. [2009] 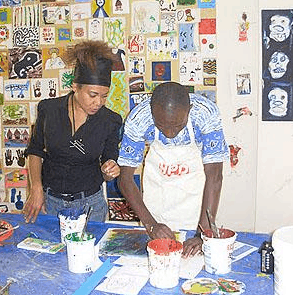 NICE guidelines recommend art therapy to help with negative symptoms but its benefits over other forms of useful occupation are far from proven. (Photo: VOA – A. Fortier on Wikimendia Commons)

Whilst much has been made of the success of arts therapy by its practitioners, there is inconclusive evidence as to its efficacy and some recent studies (notably the Matisse study) have found no benefit at all over other forms of useful occupation5. 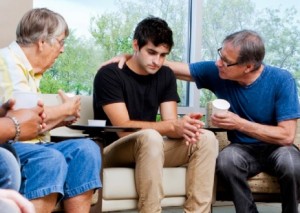 Family therapy has been shown to be a useful add-on to medication in helping the family group to adjust to the sufferer’s needs.

Family therapy is available in some areas and helps those close to the person with schizophrenia understand more about the negative symptoms, their causes and their effects on the person’s abilities. It is useful in helping to avoid angry confrontations and the equally harmful emotional distancing that can occur when someone is experiencing symptoms such as social withdrawal.

As with most other long term health conditions there have been theories around the efficacy of dietary supplements in treating the negative symptoms of schizophrenia. In particular some studies have found that supplementing diet with folate and vitamin B12 may be beneficial9. However it has to be said that whilst this may be a very promising avenue for future research there is currently no weight of evidence that dietary supplements can help and certainly prominent psychiatrists such as Torrey remain sceptical about the benefits of nutritional supplements12.

6. Singh S et al, 2010, Efficacy of antidepressants in treating the negative symptoms of chronic schizophrenia: meta-analysis, published in the British Journal of Psychiatry 2010.

10. Tandon R and Jibson M, 2002, Negative symptoms of schizophrenia: how to treat them most effectively, published in Current Psychiatry 09/01/2002.

13. Velligan D, 2008, Negative symptoms in schizophrenia, The importance of identification and treatment, published in Psychiatric Times 01/03/2008.

14. Velligan D, 2008, Negative symptoms in schizophrenia, The importance of identification and treatment, published in Psychiatric Times 01/03/2008.