Do People With Schizophrenia Abuse Alcohol? 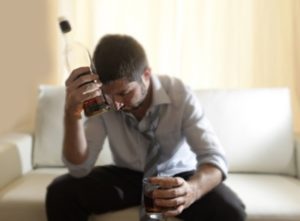 Why is Alcohol Abuse Worse for People with Schizophrenia?

But whatever the proportion of people with schizophrenia abusing alcohol is, it is still a significant issue because although there is no evidence that alcohol abuse can cause schizophrenia it certainly does adversely affect the course of the illness and its outcomes both medical and social.

People with schizophrenia who abuse alcohol will experience more frequent relapses of their psychotic symptoms 2 and their alcohol use will also cause problems with relationships with family and friends, risk bringing them into contact with the criminal justice system, damage their reputation and increase the risk of physical health problems including high blood pressure, heart disease, stroke and stomach ulcers. In addition alcohol abuse may cause employment problems if they are in work, financial problems and risk injury by accidents such as falls.

But perhaps one of the greatest threats that alcohol presents for the person with schizophrenia is that, in providing a temporary feeling of well-being, it distracts them from the very real necessity of dealing with the complex problems in their lives caused by this cruel condition called schizophrenia. Coping with the daily problems that psychotic illness presents and ultimately overcoming them cannot be achieved unless the person suffering from schizophrenia is able to focus their entire strengths and effort on the enormous job of recovery.

Substance abuse is also a clear predictor to dangerous behaviour in schizophrenia such as suicide or violence.4 This is no great surprise: people who do not suffer with schizophrenia are also more at risk of acting dangerously when they are drunk.

Between 10 and 23% of people with a diagnosis of schizophrenia will exhibit violent behaviour at some point during their illness9 and around 10% of people with schizophrenia will die by suicide. The research evidence and the experience of mental health workers tell us that there are three clear predictors to dangerous behaviour in schizophrenia.10 These are: a previous history of dangerous behaviour, failing to take anti-psychotic medication and concurrent drug or alcohol abuse issues. So use of alcohol must be a major influence on the likelihood of dangerousness.

Although people with schizophrenia are more at risk of dangerous behaviour even without the problem of substance abuse7 in most homicides committed by people with schizophrenia in the UK alcohol abuse is a contributing factor. The exact reasons for this are unclear. Yes it is true, as we said previously, that most people are more at risk of dangerous behaviour when drunk but it may also be the case that excessive use of alcohol impairs the effectiveness of the antipsychotic medication and can actually provoke a relapse of the psychotic symptoms.

Why do People with Schizophrenia Abuse Alcohol?

Why people with schizophrenia use alcohol is complex. One fashionable hypothesis is that people with schizophrenia abuse drugs and alcohol in order to “blunt” or otherwise alleviate their psychotic symptoms: that is to “self-medicate”. However it is highly unlikely that either alcohol or street drugs have this effect and it is more likely that the true reasons are probably more complex and deep-seated. 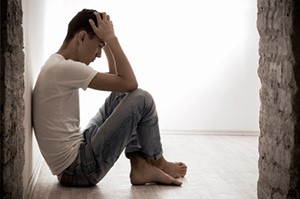 Many people with schizophrenia experience periods of profound feelings of hopelessness which may lead to abusing alcohol. (Image: Images.etc on Shutterstock)

What Can be Done About Alcohol Abuse?

Although some doctors are opposed to people with schizophrenia drinking alcohol in any amounts this is probably an unnecessarily strict imposition if there is no evidence of alcohol abuse and where the drinking is moderate.4 However where abuse of alcohol has been identified as a problem there are a number of courses of action that can be taken.

If the abuse is notable but not serious then it may be enough for the Community Mental Health Team administering the person’s treatment along with the sufferer and their family to compile a management plan. This will establish clear guidance on both the quantity and timing of the drinking and also set goals on issues like taking of medication and attendance at outpatient and GP appointments.8

However if the alcohol abuse is significant and is thought to be impacting adversely on the course of the schizophrenia or elsewhere on the person’s life then it may be necessary to take action to reduce the alcohol habit or eliminate it completely. 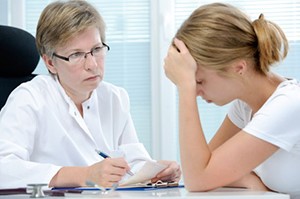 If you want help with an alcohol problem, then your GP is a good place to start. (Image: Alexander Raths on Shutterstock)

If you think or have been told that you have an alcohol problem the first step is to speak to your GP or psychiatrist or Community Psychiatric Nurse if you have one and ask them to refer you to specialist help available from the NHS. If you don’t want to do that you can also find out about specialist services available in your area on the NHS Choices website.

The NHS Choices website also gives details of national support services and there is a national helpline called Drinkline on 0300 123 1110 (Mon-Fri 9 am – 8 pm, weekends 11 am – 4 pm).
Apart from help on the NHS there are also voluntary groups that work on this issue. Alcoholics Anonymous (AA) are probably the best known support organisation for people with an alcohol problem. AA is an organisation of people who have themselves had alcohol abuse problems rather than health care professionals. They run a 12 step rehabilitation programme which is designed to achieve total abstinence from alcohol. 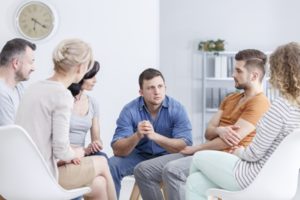 Alcohol treatment programmes based on group sessions have been effective for many people. (Image: Photographee.eu on Shutterstock)

Although many people with schizophrenia have found this approach to be useful it should be approached with some caution: some AA groups have a very confrontational approach which is possibly the last thing that a person with schizophrenia, enduring constant persecutory thinking needs. Some AA groups also believe in abstinence from all drugs including therapeutic medicines like antipsychotics and in addition some studies have found that the 12 Step approach does not work well for people with schizophrenia because of the more complex roots of their alcoholism. 5 With this in mind it is important to remain open-minded about the efficacy of AA. AA also run a telephone helpline on 0800 9177 650.

Smart Recovery UK is another UK organisation that works with people with addictions using peer support groups. Even if you don’t feel up to attending a group regularly this website is worth a look at as it contains a tool chest of useful coping methods and other reference material that will help you develop effective self-help techniques that may well help. 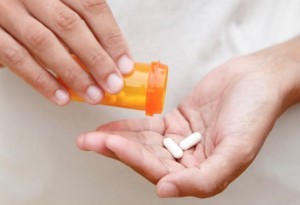 There are now some medicines available to help treat alcohol abuse. (Image: I Stock)

There are also some medicines that can be used to help treat alcoholism. Drugs such as disulfiram work by inducing extreme nausea and vomiting when alcohol is taken.6 (If you are taking this medicine it is important to be aware that certain over-the-counter medicines such as cough remedies as well as some deodorants and perfumes contain alcohol and may react). The NHS Choices website has an excellent page of advice on this . There are also drugs such as Acamprosate and Naltrexone which work to minimise cravings for alcohol. Nalmefene (Selincro) is a comparatively new medicine which may be used to prevent a relapse in people in recovery from alcohol abuse. As with any medication it is important to check with your doctor to ensure that there are no interactions between these medicines and your normal antipsychotics or antidepressants or other medication that you are taking.

In addition to medicines that target the alcohol abuse problem itself some of the modern second generation of atypical antipsychotics such as Clozapine have been found by some studies to also have a beneficial effect in reducing alcohol abuse.12 This may be because they suffer from fewer unacceptable side effects than the first generation typical drugs so reducing the need for alcohol or because they actually act on the alcohol cravings themselves.

7. Walsh E, Buchanan A, Fahy T, Violence and schizophrenia: examining the evidence, 2002, published in the British Journal of Psychiatry.

11. Petrakis I, 2007, Schizophrenia and Substance Abuse: Is There a Role for Atypical Antipsychotics? , published in Psychiatric Times.

Our grateful thanks to Sally Clapp, Alcohol Recovery Worker for the NHS in Torbay, Devon. For help in producing this information sheet.