Depression is a term that is much over-used these days to describe general feelings of low mood. However for people experiencing true depression the reality is very much worse than just a vague feeling of unhappiness. People suffering from depression experience intense feelings of sadness and extremely low mood coupled with a loss of interest in life and reduced emotional well being. They may find themselves locked into a pattern of thinking that is disabling, which prevents them from looking after themselves properly and even endangers their life.

Some of the principal features of depression are: 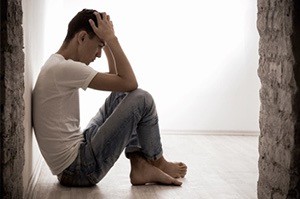 Depression in schizophrenia can be extremely disabling. (Image: Images.etc on Shutterstock)

However although it is easy to list these features it is important to appreciate that whereas most people may experience some of these features at any time in their life when they are well there is a difference between the normal ups and downs of life that we all experience and the persistent and disabling feelings of despair that typify real depression. Depressive symptoms will cause an often severe impairment in everyday functions, a much poorer quality of life and lead to more frequent hospitalisations4. They will also increase the risk of suicide considerably.

In schizophrenia depression often occurs in older people with the condition4 and is sometimes experienced by people after their psychotic episode has ended. This is called a post-psychotic depression by psychiatrists.4

How Common is Depression in Schizophrenia?

Depressive symptoms do not discriminate and are equally common in men and women6 and there does not appear to be a connection to previous life events. Some have speculated that depression occurs so commonly in schizophrenia that the two conditions may even share the same biological roots.6

Why is Depression Important for People with Schizophrenia?

It used to be thought that people with schizophrenia who had depression had a better outcome overall. This is now known to be incorrect.7 as we now know that depression will increase the risk of suicide.4 It is known that in general people with schizophrenia have a death rate about 3.5 times that of the general population and some experts, such as Fuller Torrey in the US, believe suicide is the biggest single factor of the high death rate.10 However other experts do disagree as to which cause of death is most responsible and some have found death by natural causes such as heart disease to be a more likely cause.11 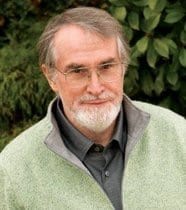 US psychiatrist E. Fuller Torrey who believes that suicide is the biggest cause of death in schizophrenia.
(Image: Andrii Imath)

Depression is probably likely to be one of the principal motivators for suicide in people with schizophrenia just as it is in the general population. Some experts believe that depression is in fact the single most important cause of suicide in schizophrenia greater even than the hallucinations or delusions.8

People with schizophrenia are thirteen times more likely to commit suicide than the general population.5 Men are more at risk of suicide with three quarters of all suicides in schizophrenia being male. Some key risk factors for suicide in schizophrenia include not taking medication, misuse of alcohol or street drugs and having depression and feelings of despair.9

People with schizophrenia who also suffer from depression are also more likely to suffer from a relapse of their psychotic symptoms and will experience more hospitalisations. 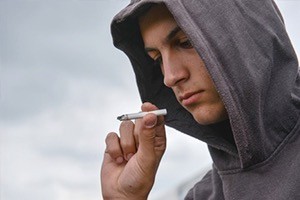 Depression in schizophrenia may lead people to abuse alcohol or use street drugs.
(Image: Axente Vlad on Shutterstock)

Negative symptoms of schizophrenia commonly include:

Comparing this list of negative symptoms with the list of depressive symptoms above it is easy to see why doctors have so much difficulty distinguishing between the two. For this reason a person’s diagnosis may change from time to time as the features of one or the other conditions become more or less prominent.

It may also be the case sometimes that positive symptoms of psychosis can be confused with depression. For instance attempts at suicide may be motivated primarily by hallucinations or delusions but may be mistaken for depression.

Depression is also important because it may motivate people to misuse drugs or alcohol. Over half of people with schizophrenia have a co morbid drug or alcohol abuse problem and this problem is generally a predictor of dangerous behaviour such as suicide and violence.

What Causes Depression in Schizophrenia?

There are a number of factors that can contribute a cause for depression in schizophrenia and in most cases more than one of these features will be experienced.

Depressive symptoms may also be caused by some physical conditions such as thyroid disorders or anaemia or as a side effect of some medications such as antibiotics and drugs used to treat high blood pressure thus further complicating diagnosis.5 These issues should be investigated and discounted by the doctor before providing a diagnosis of depression.

Schizo-affective disorder is a condition that exists when the person has the principal symptoms of schizophrenia such as delusions and hallucinations but also some problems with mood such as depression or mania. Like negative symptoms there is a fine distinction here between schizophrenia with depression and schizo-affective disorder and distinguishing between them can be very difficult for the doctor.

Many types of illicit street drugs including cocaine and cannabis will cause feelings of depression sometimes lasting for several days after they have been taken. 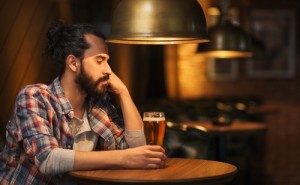 Loneliness can be a major cause of depression in schizophrenia.
(Image: Syda Productions on Shutterstock)

Man has been a social animal throughout evolution and solitary confinement is a well known form of punishment in the prison setting so it is not surprising that loneliness should have a detrimental effect on mental health. That said it must also be appreciated that some people do not mind a more solitary lifestyle and for them living alone may have no particular impact.

For some people loneliness can become a chronic problem involving a self-reinforcing loop of negative thinking. In this case it becomes very difficult to overcome and may lead to self-destructive habits such as over-eating or repeated casual sexual encounters. Loneliness can also impact adversely on personal qualities of perseverance and willpower and lead to people behaving in ways that can damage their health.16

Side Effects of Antipsychotics

Although it is unlikely that antipsychotics actually cause depression it is the case that a number of the side effects associated with them can contribute to low mood and anxiety and thus to depression itself. An excellent example of this are the sexual side effects. Antipsychotics particularly in high doses can cause erectile dysfunction, loss of libido (sex drive) and an inability to orgasm. Given that most people with schizophrenia are quite young (with three quarters of all diagnoses being made between ages 16 and 25) and at a time of their life when they quite naturally expect and want to be sexually active it is not surprising that this effect can be quite traumatic. This problem is likely to exacerbate feelings of depression and anxiety.

One of the cruellest features of schizophrenia is that it tends to strike in late teens and early twenties, a time of life when young people are beginning to mature into adulthood and beginning to realise some of the dreams and aspirations of their youth. In the midst of this important and formative part of their life comes schizophrenia which interrupts all their plans and leaves them with a diagnosis of a serious and life threatening illness about which there is much prejudice in society.

Not only does this cruel illness affect their ability to succeed with their life but it also affects their very ability to think and express themselves. It will also involve having to endure long and terrifying attacks by delusional thinking and persecutory voices. It is not surprising therefore that after suffering this, sometimes for years, many people with schizophrenia simply lose all hope and despair takes over their life.

Consequently many people with schizophrenia face lives of aimlessness and boredom leading to what the psychiatrist Richard Warner has called an existential neurosis. That is, a state of mind that self imposes an overwhelming feeling of chronic apathy on the sufferer.15 This feeling of demoralisation is extremely influential in causing depression in people with schizophrenia.5

Sadly society, certainly in the UK, has a very incomplete and distorted appreciation of schizophrenia. Apart from the rancorous reporting of the illness in the media which focuses on incidences of violence and ignores the much greater tragedy of suicide there is an over-arching mind set in our society that sees a diagnosis of schizophrenia as being a life sentence to low achievement. Against this backdrop it can sometimes be very difficult for people with schizophrenia to get back into mainstream society when their crisis is behind them.

Life events such as bereavements affect people with schizophrenia as much as the general population. However it is also the experience of many people with schizophrenia that, even after they have gotten through their psychosis, they still remain very sensitive to the stress caused by adverse life events such as interpersonal conflict.14 This increased sensitivity to stress can be very debilitating and cause people to become socially isolated.

Can Antipsychotic Medication Cause Depression?

The idea that antipsychotics cause depression arose about thirty years ago and has been extensively tested by research since. The theory goes something like this: antipsychotic drugs have an effect on dopamine receptors in the brain. This mechanism is also linked to the way the brain experiences pleasure and so it was thought by some that antipsychotics may reduce the amount of pleasure that people with schizophrenia experience from once pleasurable activities. It must be stressed that the evidence for this was never great and that various studies have had conflicting results with some finding that antipsychotics may have this effect and others not finding a link. The weight of evidence now is that antipsychotic medication does not cause depression.6 However the idea has stubbornly defied the research evidence and does not seem to want to go away. 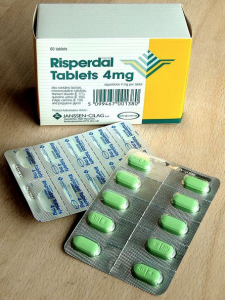 It is now believed that antipsychotic medicines do not cause depression.
(Image: Wikimedia Commons)

It should also be remembered that this loss of pleasure, called anhedonia, was observed as a feature of the illness long before the antipsychotics were developed and that symptoms of depression such as eating and sleeping less, having trouble concentrating and social withdrawal are often seen during the prodromal (preliminary) phase of a psychotic episode before any medication has been prescribed.

6. Mulholland C, Cooper S, 2000, The symptom of depression in schizophrenia and its management, published in British Journal of Psychiatry.