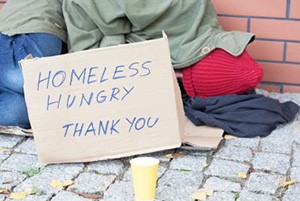 With the onset of the cold weather our thoughts may quite justifiably turn to those people who are experiencing homelessness at this time of year. There has been a recent trend to try to associate homelessness with social factors but it is vital that we do not allow these social considerations to cloud what we already know about the risks for homelessness and one of those is the higher probability that people suffering with schizophrenia or other major mental health diagnoses will end up sleeping rough on the streets.

How the increased risk works in practice can be complex. Both schizophrenia and drug or alcohol abuse can be both causes of homelessness and perpetuate it. It is of course significantly more difficult to get effective treatment for mental ill health or substance abuse out to people living on the streets no matter how well motivated the sufferers are to engage with treatment.

As far as schizophrenia is concerned we can be sure that the problem has not occurred by accident. There can be no doubt that the closure of inpatient beds in the Mental Health Service for those people with schizophrenia who are in crisis has contributed to the rough sleeper numbers. A recent BBC Panorama investigation estimated the loss of inpatient mental health beds in the UK at around 25% since the year 2000.

The association between homelessness and mental ill health has been recognised since Victorian times. Sadly, it is an enduring characteristic of the schizophrenia condition that it is often side-lined and even ignored in the public discourse. We must not allow the debate about homelessness to fall victim to that trend. We need to get rough sleepers with schizophrenia off the streets and into hospital or community care where they belong. We must have an open and honest discussion about the reasons why people fall into homelessness and that debate needs to be informed by the hard evidence provided by our scientists and researchers. Only then can we direct the resources that are needed to helping rough sleepers to get off the streets and back into the mainstream of society.

Crisis, Why are some of us more at risk of being pushed into homelessness?, social media post, published on Facebook 10/12/2021.
Fazel S et al, 2008, The Prevalence of Mental Disorders among the Homeless in Western Countries: Systematic Review and Meta-Regression Analysis, published in PLOS Medicine, December 2008.
Regier D, et al, 1990, Comorbidity of mental disorders and alcohol and other drug use, Journal of the American Medical Association cited in Warner R, The Environment of Schizophrenia, Pub. Brunner Routledge, 2000.
Olfson M, Mechanic D, Hansell S, et al. May 1999, Prediction of homelessness within three months of discharge among inpatients with schizophrenia. Published in Psychiatric Services, November 1999.
Timms P, 2005, Is There Still a Problem with Homelessness and Schizophrenia? Published in International Journal of Mental Health
Torrey E, 2006, Surviving Schizophrenia, published by Harper Perennial.