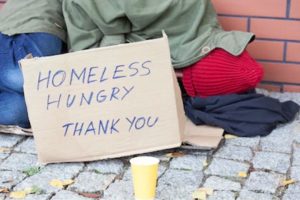 One wonders just what foreign visitors must think about the increasing numbers of rough sleeping homeless people seen around the centres of every large town and city in the UK. And this issue is getting worse with rough sleeper numbers up by 169 percent since 2010 according to homeless charity Crisis.

What is also clear is that a large proportion of rough sleepers are suffering from mental illnesses like schizophrenia. Official numbers for this problem are difficult to come by but Exeter charity St Petrocks think that over half of their clients have some sort of mental health condition. In the US, where more research has been done, some studies have concluded that up to 10% of the rough sleeping population there are suffering from schizophrenia.

It should not surprise us that the mentally ill are ending up on the streets. In parallel with the increase in rough sleeping we have also seen the National Health Service progressively closing inpatient beds in the Mental Health Service for many years. A recent BBC Panorama programme estimated that around 25% of inpatient beds in mental health have disappeared since 2000.

Whilst the romantic notion of the rough sleeper as the idealistic “man-of-the-road” rejecting society’s comforts and mores for an independent free spirit lifestyle may appeal to some, the reality is that rough sleepers have appallingly high death rates exacerbated by inadequate living conditions and poor access to health care. Rough sleeping is inevitably accompanied by inadequate diets and poor living conditions. Drug and alcohol abuse, accidental death and hypothermia are common and living on the streets is far from conducive to managing long term physical conditions like diabetes or epilepsy.