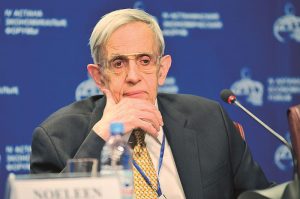 Authorities in West Windsor, USA have announced a proposal to build a new monument to the memory of John Nash, the Nobel-winning mathematician who suffered with schizophrenia all his adult life.

The sculpture is expected to cost around $190,000 and fundraising is now underway. Donations for the sculpture are being accepted by Friends of West Windsor Open Space (FOWWOS), by mail at P.O. Box 73, West Windsor, NJ 08550 USA or online through the website on http://fowwos.org/.
As reported on the Town Topics website, Shing-Fu Hsueh, Mayor of West Windsor made the announcement in June 2017. The monument, which will also commemorate the life of Alicia Nash, Nash’s wife and carer, will be created by sculptor Gyuri Hollosy and will be situated in the town’s Nash Park. The location is near to Nash’s home of many years in New Jersey and is a spot where the Nash’s would walk in the evenings.

Born in 1928, John Forbes Nash Jr. was a brilliant mathematician who
made a significant contribution in a number of areas in his field including game theory and partial differential equations. He worked at Princeton University and the RAND Corporation and his theories are widely used in economics today. In his early adult life he began to show signs of the paranoid schizophrenia that was to dominate his personal and academic life for some 20 years.

Nash’s life, illness and subsequent recovery were documented in Sylvia Nassar’s book, A Beautiful Mind and later in the award-winning film of the same name which starred Russel Crowe in the role of Nash. In addition to his many other awards in 1994 Nash was awarded the Nobel Memorial Prize in Economic Sciences.

Sadly Nash and his wife Alicia, who had contributed greatly to his care and recovery over the years, were killed in a car crash on the New Jersey Turnpike in 2015.