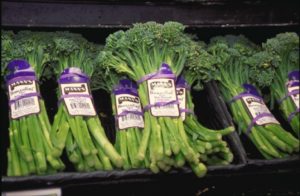 Image: US Department of Agriculture, in the public domain.

If the mainstream media are to be believed, scientists in the US have discovered a new miracle cure for schizophrenia: eating broccoli. That’s right; that innocuous looking green, stalked vegetable is apparently capable of curing schizophrenia without any nasty side effects according to a number of press articles that appeared in the US and the UK during the summer. Could it be true? Could we really have found what we have been waiting for for so long? Well disappointingly: no. Eating broccoli won’t cure your schizophrenia no matter how much you eat and to understand why there is such a mismatch between the actual research work and the media hype let’s look at what the studies actually said.

The studies carried out by the Johns Hopkins University in Maryland in the US did not look at the effect of broccoli supplements on schizophrenia symptoms but only on how they act on a certain brain chemical called glutamate. Although we are now fairly certain that schizophrenia is caused by imbalances in brain chemistry there is still considerable debate going on as to which brain chemicals are implicated and the glutamate theory is only one of many in this respect. It is by no means certain that glutamate is the cause of schizophrenia. In addition the Johns Hopkins studies were carried out on a fairly small group of individuals only 81 people with schizophrenia in the initial study and only 9 in the study into the effect of broccoli supplements.

But the idea that broccoli supplements may be useful in treating schizophrenia is not new: it was looked at by a group of scientists at the Chiba University Hospital in Japan in 2015. In that study which was also of a very small number of people the scientists did actually look at the effect on schizophrenia symptoms rather than brain chemistry and found that broccoli had no effect on positive symptoms like hallucinations or delusions nor on negative symptoms like social withdrawal but did find some minor impact on cognitive symptoms like thinking skills.

So the broccoli study must join all those other theories linking schizophrenia with diet that we have seen over the years: gluten, B vitamins and more recently Omega 3 supplements that seemed initially so promising but in the end delivered very little by way of new approaches to treatments. It definitely isn’t time to stop taking the antipsychotic medicines which we know from much more weighty evidence can significantly reduce the risk of relapse and rehospitalisation in people with schizophrenia.