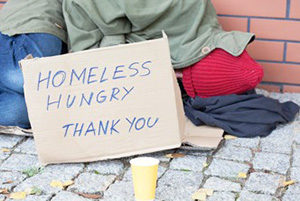 Public Health England, the government agency set up to protect and improve public health in the UK, announced recently that it would be providing £1.9 million in funding to research new ways in which health services can reach the homeless rough sleeping population. PHE has already shortlisted projects and will be announcing the five winning schemes in October 2019. The aim is to identify new and better ways of getting rough sleepers access to health care which will include drug and alcohol abuse services and talking therapies. This is very welcome but is long overdue.

This is a key issue for people with schizophrenia because we know that they are disproportionately represented amongst the rough sleeping population. In fact people with schizophrenia are ten times more likely to end up rough sleeping than those in the general population. And because mental health services in the UK tend to be designed for people in stable home environments it is rare for rough sleepers with mental ill health to have good access to mental health care.

And the number of rough sleepers living on the streets of the UK continues to rise. BBC News reported in June of this year that 8,855 people slept rough in the capital between April 2018 and March 2019.

This general picture of neglect has a very high cost. According to Homeless charity Crisis, suicide rates amongst rough sleepers are nine times higher than that of the general population and we are now seeing press reports from homeless charities of rough sleepers being targeted by people traffickers who are coercing them into working for little or no wages and even abducting and imprisoning them.

But rather than trying to address the mental health needs of rough sleepers, some authorities are increasingly seeing law enforcement as the way to deal with the problem with an increasing use being made of the archaic Vagrancy Act and measures such as Dispersal Orders and Anti-Social Behaviour Orders to control rough sleepers. A strategy as ineffective as it is inhumane.

It is vital that we find new ways of reaching rough sleepers suffering with mental ill health so that we can start to address the rough sleeping issue at its root. It may be that rough sleepers are amongst the most difficult patients to contact and engage with but that should not deter us from trying. Rough sleepers are citizens of our society and as such should have the same right to access high quality psychiatric care as any of us.

Fazel S, et al, 2008, The Prevalence of Mental Disorders among the Homeless in Western Countries: Systematic Review and Meta-Regression Analysis.

Timms P, 2005, Is There Still a Problem with Homelessness and Schizophrenia?, published in International Journal of Mental Health.